When I first saw an uncredited photograph that I later learned was taken by Fred Mount, it was floating around somewhere within that realm called the internet.  I was pleasantly surprised when I saw the same image on his site not too long ago.  I contacted Fred, whose home base is in Buffalo, New York, and he graciously accepted the offer to be featured on this blog.  I'm glad I asked, too.
Please allow me to take care of an administrative task by stating that each photograph in this article is © Fred Mount.

To start, there are three things that matter most to him:  His wife, his motorcycle, and his camera.  Fred has a sense of humor, which is essential in my opinion.  He has a brutal honesty I find refreshing.  He carries with him a notebook to write down an idea at the moment.  After letting the idea sit for a while, he will write and sketch a scene for later composition.
I view Fred Mount's photographic work as fine art.  I like the vision, the creativity, the courage, and the results of his work.  However, Fred doesn't want to be put in a box or defined by someone else's labels.  His words are best used to describe:
"I don't consider myself an artist or a photographer.  I see myself more as an adventurer of life.  I happen to use a camera to get these visions out of my head.  Without some kind of release I would probably explode or implode whichever happens to come first." 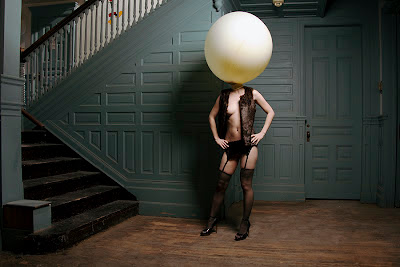 In order to graduate from college, Fred needed to take a course to fulfill the arts requirement for his degree.  Yes, it was a photography course.  What happened next?  Fred continued to work with a camera to keep from being bored after the conclusion of the class.  I shall use his own words:
"I am the type of person who always has a project and who is always moving.  I like to say I'll relax when I'm dead; until then I have shit to do." 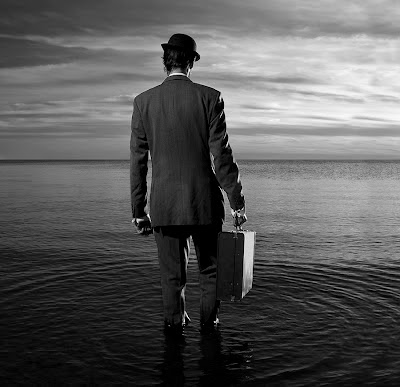 Fred exudes a lot of passion and emotion, which is evident to me from viewing his photography.  More of his thoughts about photography and what drives him to create:
"My motivation is still partly to keep boredom at bay, but it has evolved into something so much more than that.  For me it's become an addiction.  I have photography on the brain, and there's no getting rid of it.  Richard Avedon definitely got it right when he said, 'If a day goes by without my doing something related to photography, it's as though I've neglected something essential to my existence; as though I'd forgotten to wake up.'  It's maddening when all you can think about is doing photography, but you're stuck at work." 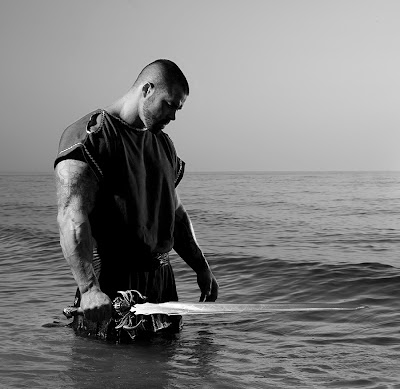 The Remembering Warrior
© Fred Mount
Fred began his creative journey at age eleven when he started playing Dungeons and Dragons.  He is a story teller, and he can take viewers into an imaginary world through photography.  One can surmise that it isn't always a beautiful world.  The story, the metaphor, and even the physical is sometimes dark. 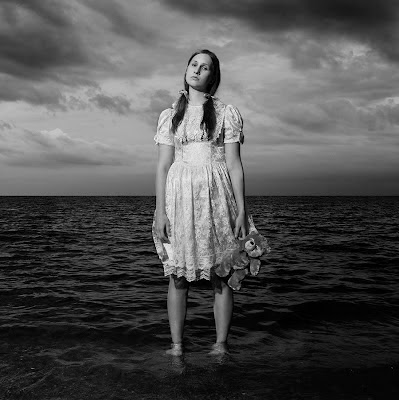 The Lost Innocent
© Fred Mount
Fred was in a dark period in his life when he gained an interest in photography.  Photography was the vehicle to release anger, emptiness, and frustration.  Growth has been painful, even disheartening, but there isn't any other choice but to move forward -- like an addict looking for the next fix.  As he has matured, his photographic work has more meaning, and it has a message to share.  To emphasize the point, he states:
"This is very important to me:  aesthetics are nice, but for me if a photograph doesn't have a deeper meaning, then what's the point of showing it?"
If there is a person who has inspired him, it would be one of his undergraduate teachers, Stephen Houseknecht (Mr. Houseknecht's photography can be viewed here).  It was Mr. Houseknecht who taught Fred the basics of photography such as composition and color correction.  It was he who taught Fred to get the photograph right in the camera.  From this teacher Fred learned a most valuable lesson and that is to "not give a damn what anyone else thinks of my work."
The Giant Balloon series was shot with Climb in Balloons, which can be imported from Italy.  At the time, Fred was a maintenance man in Buffalo, and he had access to many different buildings and locations that provided a fantastic setting for the series.  The ever handy shop vac was used to inflate the balloons, and while lubed up with a silicone based lubricant, a model would climb inside it.  As it happens, Fred's favorite image from the series is pictured below...In the Absence of Hot Air.  The balloon deflated by accident around the model, yet everyone kept their composure, and Fred was able to get a couple of shots of that scene. 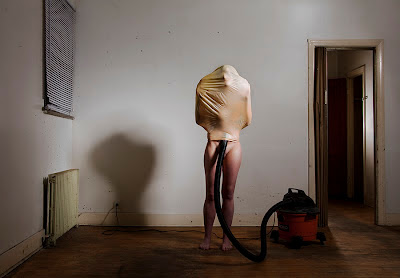 In the Absence of Hot Air
© Fred Mount 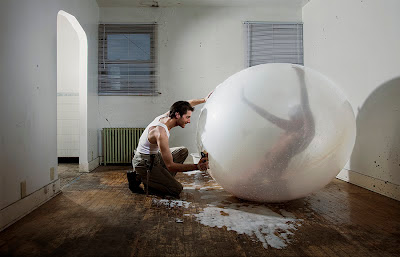 Woman Trapped by Her
Unwillingness to Just Stand
© Fred Mount

Fred is aware that creativity cannot be forced.  The fluidity of creativity must flow naturally and with some ease.  His project "Angels Over Seoul" is a case in point.  The first two photo sessions went well, however, a sense of stagnation became present and the project was shelved.  If the feel for the project returns, then shooting will resume.  On a personal note, I believe the images are marvelous. 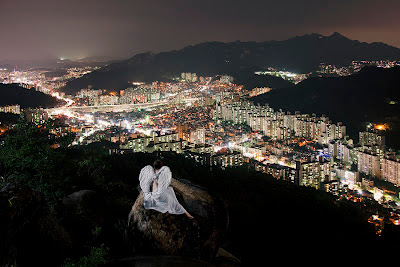 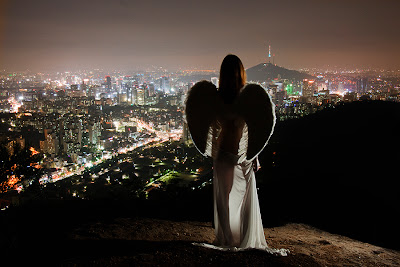 How Fred completes some of his photographs can be illustrated by the Floating Orb series.  He taped a 3 foot balloon to his Alien Bees 7 inch reflector prior to taking the shot, and then removed the stand of the reflector during the post production phase.  It wasn't easy, but the results are impressive.  It is taking what is imagined and doing what is necessary to share the story. 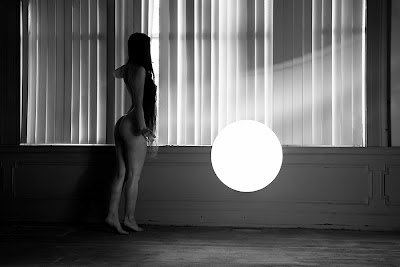 Woman Ignores What is
Right in Front of Her
© Fred Mount 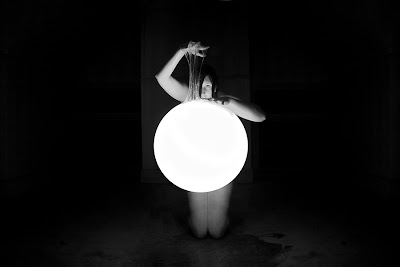 The Light That is
Hard to Ignore
© Fred Mount

The Water War series provided a chance for Fred and his wife to have some fun.  The Alien Bees were set up in a triangular formation around the models, and for eight hours with over 100 water balloons expended Water War was shot. 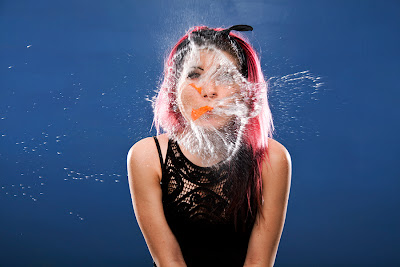 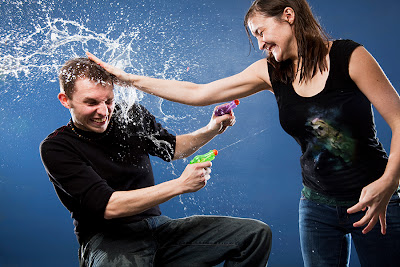 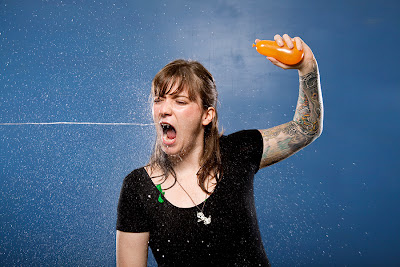 Fred and his wife are currently fulfilling a dream of traveling the world by living and working in South Korea.  They will see more places and experience different cultures before returning to Buffalo in order to see a couple of other dreams bear fruit:  gallery representation, and eventually opening a gallery.  It is Fred's desire to provide young artists a place to show their artwork, and to build a community of artists willing to support each other.
Beginning October 26, 2012, Fred will be exhibiting his photography in a large group event at the 2012 Jeonju Biennale.  The theme for this show is Paper Road.  This is his first exhibition outside the USA.  The following is the address of the venue hosting the Jeonju Biennale:
2012 Jeonju Biennale: 'Paper Road'
2012 전주 비엔날레 조형작가전 “페이퍼로드 – 백색의 향연”

In November 2012, he will be showing in Spark Fest, which will be held in Seoul.  He will be involved with the setting up and promotion of this event, and that is exciting for him as it will help him learn important details for his future goal of opening his own gallery.
To see more of Fred Mount's photography, please visit his website:  Fred Mount.  I do like his work.
Posted by Unknown at 10:50 PM