Photo For the Day: Home From the Harvest

In a previous post titled, "Pool and Trail", I wrote that fisherfolks from the fishing villages located on the coasts of South Korea use a special sled to travel the mudflats during low tide.  "Home From the Harvest" shows a fisherman returning to the home shore after collecting seafood from one of the farms that is exposed during the low tide. 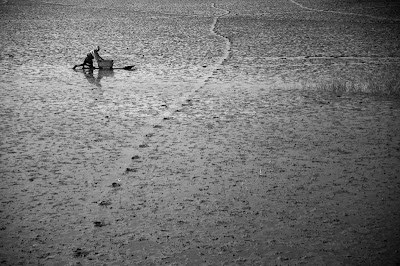 
This photograph was composed one late autumn afternoon in October 2011.  The harvesters easily communicate with one another despite the distances since voices carry well along the flats.  They often sing and joke one with another.  It is not uncommon for harvesters to ham it up for those who are photographing them while at work.

"Home From the Harvest" is a part of an article that was written about my longitudinal study of Suncheon Bay.  The is found at the Groove Magazine website here.

If I were a videographer, I would be able to share the poignant scenes of how the younger sledders far out pace the older sledders whose struggle to reach the shores before night fall is obvious.