For years now the photography of Sylvia de Swaan has touched me deeply.  There is European history, feelings and emotions, and a personal interest of peoples slaughtered and displaced just for being different, powerless.  In some of her projects, Sylvia de Swaan is an intimate part of the subjects of her compositions as can be seen with her hands reaching and connecting.

Sylvia:  I’m an artist/photographer who was born in Romania and has lived and worked in Mexico, Europe, and the U.S.A. I’m a traveler, explorer and seeker. Though I adapt easily to new people and places, on some level I often feel like the odd person out, the one who can’t give a short one line answer about who I am or where I’m from, the one whose lineage was truncated before I was even born and whose early history is a blur of trauma, change and movement.

Eaton:  What do you do?  Most importantly to me, why do you do what you do?

Sylvia:  I have a long track record in the arts dating back to my teens at the High School of Music and Art, one of NYCs public schools for specially gifted students - where we already were treated as serious artists. In my early twenties I went on a six-month visa to Mexico City to make art and have an adventure, and ended up living there for eleven years – got married, had a son and became an active member of the arts community. My works on paper, paintings, light boxes, and others were exhibited in numerous one person and group exhibitions. Eventually at a lull in my work, I became interested in photography and had an informal apprenticeship with Rodrigo Moya, a Mexican photographer who took me under his wing and taught me the rudiments of the medium. I only meant it as a temporary digression from my “real work,” but much to my surprise photography little by little won me over.

I’m one of those fortunate people who wake up in the morning and mostly do what I love to do, i.e., my own work - whether that consists of being involved in a long term project; sometimes traveling, other times being home – shooting film, processing, editing, designing a book, preparing for exhibitions, or writing about the work. Or on the other side, to earn money or part of the overall creative process, I teach photography, give slide lectures, curate exhibitions, and for sixteen years was Executive Director of a studio arts organization.

Eaton:  Your resume is remarkable. In my opinion, it is a statement about your work ethic and the quality of your artwork. What did you do to become recognized in the art/photography world? How do you sustain your incredible reputation and the flow of your work?

Sylvia:  Thank you for considering me more successful than I think of myself – but it is a fact, to paraphrase some famous person, that nobody thinks that they are thin enough, rich enough or famous enough. I’m a Leo with a Virgo rising – which means that I’m both outgoing and introverted. My underlying belief is that if one makes meaningful work wherever one is located, somebody will take notice. That was my philosophy when in 1979 I was invited to be the director of a fledgling residency program for sculptors located in Utica NY, which under my watch gained an international reputation among artists, was awarded a New York State Governor’s Art Award, a Mac Arthur Award – and it’s also my philosophy regarding my own work. I’m not particularly good at standing around at openings with a glass of wine in hand making scintillating conversation – but I do think it’s necessary to do professional outreach on some level, so that ones work doesn’t languish in the closet with no one to look at it.

The internet and social media are very useful for disseminating ones art to a broader audience, without having to be in that awkward position of banging on a gallery door with a heavy portfolio in ones hand. I post images on Facebook, in part to look at them myself in an open arena, using it as an editing space – but at the same time my worldwide community of “friends,” among them artists, photographers, critics, writer, can see them and react or not…so of course a much broader international public now know my work than before.

Eaton:  Who and/or what influences and/or motivates you?

Sylvia:  My influences are cross-disciplinary. Since I didn’t start out as a photographer from the very beginning, I don’t share in some of the holy canons of photography that seem to preoccupy others. In some ways my work relates more to film and literature – because of my interest in narrative and time and memory. Nevertheless my early inspirations were painters: Kandinsky, German Expressionists, Surrealists, Picasso, Goya, Redon and many others. As to photography Bill Brandt, Duane Michals, Kenneth Josephson, Roger Ballen, Lorna Simpson, Duane Michaels, Nan Goldin, Eikoh Hosoe, James Nachtway and many, many others. 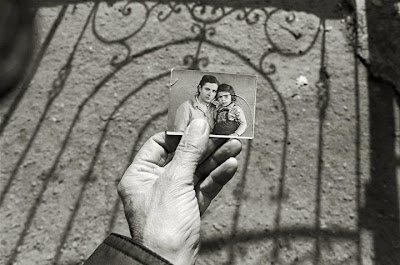 Eaton:  Your photographs, “War Game” and “The Tunnel,” command my attention, as do many other of your images. What are you trying to communicate to those who view your art?

Sylvia:  The two images that you mention are part of a long-term project titled, “Return,” that I began in the immediate aftermath of the fall of the communism – in order to explore the terrain of my early childhood, and retrace routes my family traversed as Holocaust survivors and refugees at the end of the Second World War. These images are part of a symbolic language that I developed over time to depict the invisible, the bygone and the intangible. In my journal I’d written, “how does one photograph and absence?”

By the way, none of my photos are photoshopped. They’re all taken real time and space. So for example “The War Game” is a picture of my hand holding a model P38 bomber (that for a nano second is meant to look real) overlooking a railroad yard in Poland to depict a recurring nightmare from my childhood years.

So as not to repeat myself excessively with things I’ve said elsewhere, I copy and paste a post from Fototazo that tells about this project and my intent to work on a sequel this coming summer:

Eaton:  You have an extensive background speaking to the subjects of being published, exhibiting your artwork, and receiving grants. What advice can you share with an artist or photographer who wants to broaden his or her own horizon?

Sylvia:  There are no formulas, but I think for starters you have to love your work and be sufficiently engaged in it to push to ever further and to be willing to edit out your favorites, because they may not contribute to the narrative as a whole – but also you have to share it, send it out and apply for stuff. While it does happen sometime that artists have been “discovered” without any effort on their parts, it is pretty rare and unlikely.

There are two sides to being an artist – one is the inspirational, visionary, who shouldn’t be overly concerned with audience or money during the process of creation – the other is the more practical, professional. And of course because there are many more artists than opportunities available every application is a long shot. But it’s definitely worth trying - first because one gets better at it with practice - better at editing, better at presentation – and second because respected professionals get to see the work, and even if one isn’t chosen as numero uno, somebody might remember and recommend one's work at a later date.

When I apply for a fellowship or grant, I put a lot of work into it, doing the best I can at that particular moment. When I send it off I usually don’t think of it again until just before the scheduled announcement dates.

Below is a link to the American Society for Media Photographers that offers some very useful advice about competitions and how to apply:

Eaton:  To date, what accomplishment has created the most satisfaction for you?

Sylvia:  Like any artist who has worked for a long time I’ve had my share of successes and disappointments. What gives me the greatest satisfaction is my trajectory as a whole, for the fact that I’ve consistently developed and grown as an artist, have never had to compromise my aesthetic or beliefs – and though I haven’t gotten rich I do support myself and have been honored to be awarded prizes and fellowships for my works.

But my formative milestones were being accepted to attend the H.S. of Music and Art; venturing to Mexico in the 1960s and creating a rich, interesting new life there; having a son; living in New Orleans in the mid 1970s; coming to upstate New York; my sixteen-year job as director of Sculpture Space, which I left to devote myself again to my personal work. I feel grateful and privileged for all the fellowships and awards that have facilitated the creation of new work and hope to continue making meaningful and relevant work that will garner me support in the future.

Eaton:  Please share any links to any sites so that readers can see more of your work.

Sylvia:  Though I’ve only mentioned one here by name, but I work on several long-term projects concurrently:

Her photo blog is found here.

For those readers who use Facebook, some of Sylvia de Swaan's work can be seen here.


Eaton's Note:  Read Sylvia de Swaan's resume at her website here.  Please also note that I received an updated version of the resume from Sylvia de Swaan.  Rather than repost the entire resume here, I shall share some current information: