Occasionally, I will visit Busan to shop for clothes in the Chinatown district.  Many will say it is Russiatown, and even an old, old timer will still call it Texas Street.  Regardless, there are shops there that sell clothes that will fit my frame.

What struck me as my wife and I set foot into the district was the mass of humanity.  After shopping was completed, we strolled up to the next street that proved to be sparse of people; we found a wonderful Korean restaurant.  The 돼지국밥 was excellent.  Meal completed, we ventured back into the mass to look at a couple of other shops.

Though there was shoulder to shoulder traffic, everyone was polite.  And then I saw the uniforms.  No...the uniforms the working ladies wore to designate the specific place from which their trade is performed.  One Filipina team wore single piece urban camo tube dresses, while another wore two piece aquamarine outfits.  The camo team, while standing and sitting in the doorway of their establishment were bantering with some other team across the narrow road where all the shops are located.  Ah, those were the Russians, who wore a dark something or other...I couldn't tell, because I was distracted by the orange, purple, and pink hair.

One oriental group, by numbers a large team, wore silver dresses with a lot of reflective circles -- much like the lures fisherman use to catch fish.  A team that I called the Europeans were all tall with olive complexions and intelligent eyes that burned.  They wore black, and their beauty was stunning.  There were other teams, but I had to watch where I was walking due to the crowd.  All of the teams were calling and beckoning.  I looked at my watch; it was only 3:30p.m.

Anyone who has lived in Korea will know that shopping in this area, for clothes and shoes, is done during the daylight hours, but after dark another type of shopping becomes the front and center attraction.  Or so 'they' say.

My wife stopped at a table to look at some colorful socks.  나는 쳐다봤어요.  Above the sea of humanity were banners curving from one building to another across the narrow road, in the form of a large smile of some imaginary being, that read, "Welcome, U.S. Navy."  The mystery was solved.  And I laughed.

My wife was so engrossed with the socks that she didn't notice the old deaf Korean man begging behind her.  I signed to him and with a huge smile he darted up to me.  His mastery of American Sign Language was far greater than my mastery of Korean Sign Language, so we talked using ASL.  He felt lucky asking for more money than I gave him, but he was off to another person when I said no.  But he did make a big show of his gratitude using KSL.

Then off to Haeundae Beach for an early evening view of the ocean.  This is what I saw: 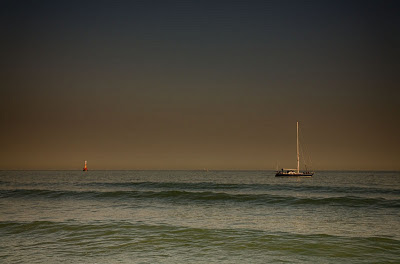