This short article is a discussion about my photography of fire.  To see my work with fire, please visit my website here.

While living in the United States I mostly resided in one western state or another.  Western US states are prone to devastating brush, range, and forest fires due to man's mismanagement of natural areas of the country...as if nature is going to follow any government edict.

One solution used to combat these fires is to fight fire with fire by initiating controlled burns in designated areas in order to reduce the excessive build up of dry fuel that, in the past, nature dealt with in her own way.  Those who know my work know of my love and appreciation for water and the sea.  I also happen to respect fire, too.  These controlled burns provide so many photographic opportunities.

I will share the procedures and protocols I used when legally entering a controlled burn area.  To preface just a bit, if someone were to ask me about photographing fire in a natural setting, I would have this to say:  Don't do it!

There are dangers involved with photographing fires.  The smoke and particulates that are continuously breathed in, especially when in the the fire area itself, are ill-suited for human lungs.  I've had chronic bronchitis since childhood (living in Los Angeles during the heyday of smoggy days was a challenge for this active boy), and I'm sure I knocked some years off the lifespan scale photographing fires.

Additionally, fire does not follow the Hollywood script; fire has its own rules and its own life, and when it speaks, it demands attention and respect.  The influence of fire is both above and below ground level...roots burn, too.  And the ground above a root system that has burned out is not strong enough to support the weight of a human.  I've dropped up to my stomach level into a root hole a couple of times...at night...it was surprising since the ground looked normal in the light of my headlamp.

Now, the procedures and protocols I used back in those days of living in the western US.

1)  There are various news agencies and forest service agencies that announce when and where a controlled burn is taking place.  It should be obvious that these same organizations will announce forest fires and the like also.

2)  Most controlled burns are on public lands, hence access to said areas is permitted.  Several times I've seen campers and hikers set up camp in the fire area.  If access is not permitted for any reason, do not enter.

Years ago I drove into the then active fire near Strawberry, Arizona to look for a great spot to photograph when I met a fire security officer in his marked truck.  He asked me incredulously how I had driven to this specific place where we met.  I told him that I drove.  He informed me that there should have been three checkpoints to halt any entrance into the fire area.  He was the only person I saw, and he believed me for the simple reason that I was there.  I told the officer that I photograph fires, and he then said he would show me a great spot to view the action.  It was just outside the fire area on a hill; during the drive he could clearly see there were no checkpoints to stop anyone from entering the fire zone.  All that changed in a few minutes, I noted.  The officer was a great man to work with.

If I saw signs that informed that entrance is not permitted, then I did not enter.  In the case I cited above, I followed the instructions of the officer.  As a result I was shown a great spot to photograph the fire.  As it so happened, I spent many hours at that location, and it turned out that the fire started to climb the hill I was on; I could hear the fire crews shouting to each other in the dark as they worked to control the fire.  "Voices at Night" was one image from that time on the hill. 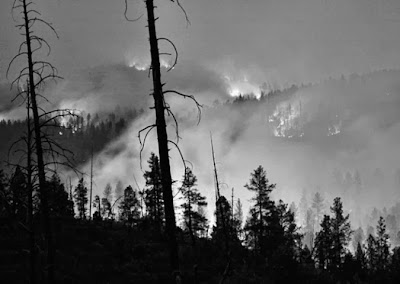 3)  When I planned to go into a fire, as opposed to going to a fire, I told someone.  It was always ideal when I had a partner or two just so everyone could watch out for each other.  Most of the times, I would be alone.  If I saw another person in or near the fire, I would stop and say hello.  That was another connection that worked both ways.  Always.

4)  Equipment and gear...note that fire conditions produce a lot of smoke, soot, ash, dirt, debris, smells, and all manner of unexpected things.

A -- I paid attention to the types of synthetics I wore, especially during the winter burns.  A lot of synthetics can melt and burn given the correct circumstances.

D -- Food and water.  I always went prepared with at least two meals for unknown contingencies.

E -- Back in the day, had I a cellphone or some other tech gadget to connect with other people, I would have taken it into the field.  I suppose it would have been nice to have a digital map, but even today I would prefer a topographical map of an area I planned to visit.

F -- The usual camera gear and equipment, which included a tripod.

A -- I have already mentioned above about the burned out root holes.  I made it a point to watch where I stepped.  This is especially true during night photography.

B -- Dead and dying trees become fast friends with fire.  Just as the root system of a tree can burn, so can the interior of a tree...and that presents different hazards.  During the day, if I saw smoke coming out of a tree, I would be sure to be twice the distance from it than its height.  Nature has a way of flinging and tossing things a far distance.

Burning trees at night posed greater concerns, because the tops of trees were not usually visible -- especially if a tree was burning from within.  If I did see smoke or flames emanating from a tree at night, I would remember the general height of the trees in the area and triple the distance.

It was not uncommon for me to hear the groans, moans, snaps, and crashes of trees falling to the ground, but I had never witnessed it until one night.  I was on a forest road when I came upon an area that was actively burning on one side of the road only.  I pulled off to the non-fire side of the road and forced my big frame out of my truck.  I immediately became aware that something was different.  Fire speaks its own language, and when it has the upper hand, it lets everyone know.  The tree was singing its own death song, and I knew I had to hurriedly set up all of my gear to witness the fall.  I could not see the tree, but I could see the fire coming out of the tree.  I had no sooner set up the tripod with the camera, the attached shutter release cable ready to go, and everything leveled and squared when the tree shouted its farewell.  I knew I was less than my triple distance rule from the tree, but there was nothing I could do about it right then.  This was the only falling tree I have ever photographed: 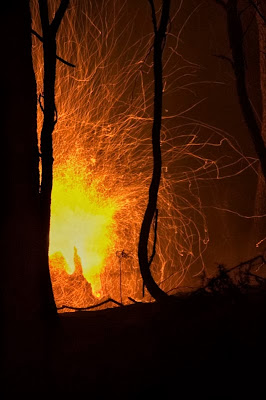 Fire shot out of the falling tree and the burning embers were like rockets.  It is difficult to gain a perspective from the photograph, but the size of the fire was immense.  I was glad the tree fell to the left and not towards me.  Perhaps the tree in the foreground would have shielded me, or perhaps not.  I just don't know the answers to such questions.  Strangely, after the tree stopped bouncing on the forest floor, and after the fire hit the ground, it became dark as night.  Only my headlamp gave light; all other light seemed to have retreated.  I knew I had photographed something rather rare.

C -- Controlled burns have been known to become out of control forest fires.  Near Flagstaff, Arizona, my partner and I were once completely surrounded by a fire.  It was the friendly fire that is reminiscent of the neighborhood kids playing a prank on someone.  We just walked through it...well, more like over it.  Not once did I ever feel it worthwhile to test the patience of an angry or fast fire.  Never.

Just as many humans smolder and keep their anger just under the surface, it is obvious something is not right.  They aren't ranting or raving, but something is not right.  So, too, with fires.  A fire can be quiet, yet smoldering...just waiting for the right set of circumstances to vent its anger.  Just as I could never reason with a raving angry person, I knew I could never reason with a raving angry fire.  I always had sense enough to run away.  It's too bad I never could quite practice that same principle with people.

D -- My final safety protocol is a bit of advice:  Don't go into a fire to photograph a fire.

One image I happen to be very fond of was taken one night during a full moon.  It was a cold November night, and the eerie light shining through the smoke of the fires is something I hope never to forget. 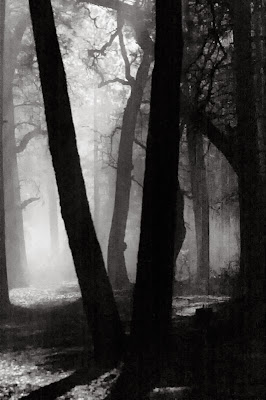 It was during this night I experienced my first drop into a burned out root hole.  The hole was very warm, and I made it a point to exit rapidly.